Following some feedback on my Washbag / Dopp photos I have been exploring ways to reduce some of the weight. The two heaviest items were my electric toothbrush and electric razor – both of which I’ve managed to slim down somewhat.

On the left is my Oral B Braun Professional Care 1000 rechargeable toothbrush that I’ve been carrying with me since September 2011 (£29.99). It’s an excellent brush – deep clean, with a timer. A bit noisy but I’ve never had any issues with it – very reliable. The brush weighs in at 130g (including the 4g head) and the charger weighs in at 123g (including the 8g black AU adapter). I would also stock up on the Oral B heads when they were cheap resulting in my carrying up to 8 of these 4g heads. I then decided that since 253g was a lot to carry for trips I would buy a separate non electric toothbrush – in this case a Colgate 360 (23g). Tot that up and I’m carrying a total of 308g for my teeth.

Enter the Colgate Omron Pro Clinical 150. I purchased this battery powered toothbrush six weeks ago from Priceline for a mere $20 (about £12). It weighs just 51g (including the 4g head and the two 7g AAA batteries). As always – Energizer Lithium is the way to go with batteries for the lightest weight and longest life. The brush itself is significantly quieter – probably because the head vibrates rather than spins – but the clean is certainly equivalent to the Oral B if not better. I’ve only been using it for six weeks so I guess time will tell but I’m pretty happy with the results. Also since this toothbrush is almost the same weight as my travel toothbrush I don’t mind carrying it on trips – allowing me to ditch the 360, and the heads are sold in packs of two so no risk of carrying too many.

I’ve slimmed down my toothbrush from 308g to 59g (or 276g to 51g without spare heads) and my teeth actually feel cleaner for it.

Next up; the electric razor:

I purchased the battery powered Philips PQ203 in September 2013 from Boots UK for £12. The shave is clean although it can be time consuming – not quite as effective as the three headed razors which weigh a lot more. It’s a neat little device that weighs in at 136g (including the two 15g AA batteries and the 6g cap)

Happy with the Philips shave (as opposed to the Braun which I generally don’t like), I decided to see what new products they have – sure enough they have an improved travel shaver; the Philips Norelco PQ228 which charges from a USB port in the base. Again with only six weeks on the clock it’s difficult to gauge longevity but the shave is significantly better and the redisign makes the device more ergonomically pleasing 🙂 This weighs in at 114g (including the 6g cap) plus 13g for the USB cable (although I already carry one of these). OK so a drop in total weight of 9g from 136g to 127g isn’t exactly worth writing home about but given the improvement in shave I’d say it was a worthwhile purchase.

It’s also interesting that I moved from rechargeable to battery on the toothbrush but the other way on the razor. I guess my eco credentials remain balanced.

EDIT 02/03/17: Since writing this blog I have ditched the Philips PQ228 shaver. The 8-hr charge for 30-min of use became an imbuggerance – particularly when the thing died mid shave and I had to wait an hour before it would even turn on again. Initially I returned to my trusty Philips PQ203 but for Xmas I treated myself to a newer Philips Norelco PQ208 (AU$24 from eBay) which is, by all accounts, exactly the same as the PQ203 but with ‘self sharpening blades’. In any case I needed new blades which I couldn’t source separately. It also weighs marginally less at 130g (92g for the shaver, 2xAA 30g, Brush 2g, Guard 6g) thus negating 66% of my whopping 9g reduction on the PQ228 anyway. 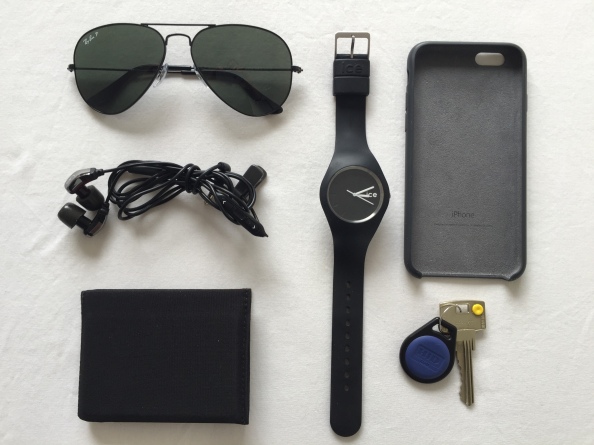 It occurred to me that, having written about the content of my two bags, I really ought to finish off my list of possessions with my EDC so here it is. A nice short post because there’s only six items.

Ray Ban Black Aviators 31g
I used to follow the advice of Eddie Spaghetti who recommended not spending more than $10 on a pair of sunnies – then I discovered the quality and clarity of Ray Ban and I am utterly sold. They fold almost completely flat, they weigh less than cheaper brands but the quality is evident in the build and fit. They’re polarised and having worn them a lot in the last six months they haven’t scratched either. LINK

Ultimate Ears 600VI Headphones 18g
Everyone has their favourite brand of buds, I used to swear by Sennheiser having shunned Bose and Skullcandy, but then I discovered Ultimate Ears. The brand are owned by Logitech (not known for their audio) but damn these things sound immense. Deep bass with superb mid range. The passive noise cancelling is down to the fit of the foam buds and I stick to Comply Foam TX500 Isolation plus Wax Guard which fit my ears perfectly. LINK

Slimfold Micro Soft Shell RFID Wallet 18g (46g full)
This is actually my third Slimfold wallet and I absolutely love it. It weighs next to nothing and has an almost zero profile when empty a but is tough as nails, waterproof, and perfectly designed to hold all I need. I can fit whatever cash (notes) I have and up to 8 cards (including two in the back sleeves behind the RFID protection (so best not to use this for credit cards!). I hasten to add I have upgraded through choice each time (from Tyvek to Soft Shell to RFID Soft Shell). I’ve never had a Slimfold fail me. LINK

ICE Unisex Quartz Watch 46g
I have been looking for a simple minimal watch for ages and I spotted a family member wearing this one on a recent trip to the UK. It is beautiful, elegant and simple. The strap is silicone which is very comfortable to wear and easy to clean (the watch is waterproof). All I need a watch to do is tell me the time, my smartphone does all the gimmicky things. It’s easy to read and fits my skinny wrists just fine. LINK

iPhone 6 128GB 129g
Case only pictured as the phone was used to take the picture. My eighth iPhone – safe to say I’m locked in to the cult of Apple when it comes to smartphones. There really isn’t much to say about this device that you likely don’t already know. It’s replaced so many things I would otherwise have to carry separately, and while the battery life is disappointing it’s ultimately a fine piece of kit and carrying all of my photos and music in my pocket still gives me a lot of satisfaction

Keys 17g
Not exactly essayworthy, simply the keys to the AirBnB I currently reside in. Thankfully not too many of them. I’ve certainly had worse.

That’s it. Nice and simple.